As the title says I have spent today doing not very much and it was just what I needed. I didn't quite get the long lie in I wanted as Doug kept disturbing me so I got up and sorted him out. When we got some bits from aldi yesterday I treated myself to some of their sub rolls and had this monster sandwich for breakfast. 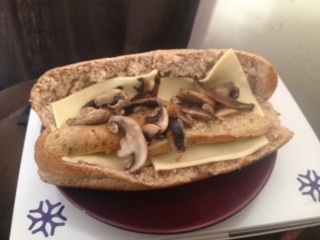 The sub roll worked out to be a heb plus 1.5 syns as I took some of the bread out and then I added mushrooms, three slices of low low cheese and a tesco meatfree lincolnshire sausage. It was blinking awesome and I will be having something very similar tomorrow. Infact it was so awesome I insisted on going and telling Rich about it...not sure if he appreciated that but hey it was his getup time! 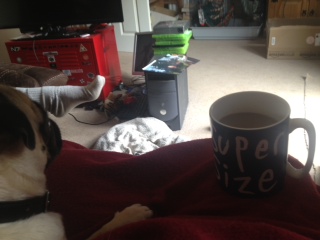 Huge mug of coffee!!! Sneaking into the picture is Rich's foot and Doug who was busy watching Eastenders. 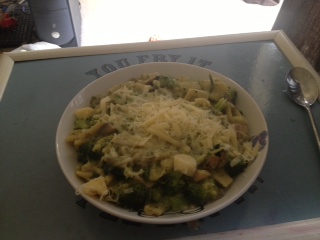 I added broccoli and mushrooms and it went down very well. After this I decided a bubble bath whilst listening to the football was in order.

Yesterday when Rich was going through the freezer he found some quorn chicken nuggets and decided he wanted to try them for dinner. They work out as 1/2 a syn per nugget and they were really tasty. I cooked up some of the best SW chips I have done in a while along with some mushrooms and onions. It felt like a really naughty dinner even though it wasn't 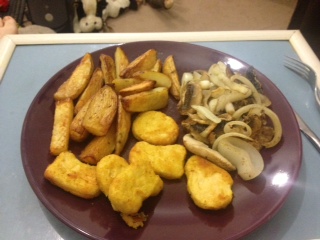 The only thing missing was some tomato sauce so think I will have to go and find my recipe for it. 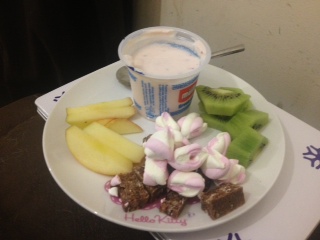 Apple and kiwi chopped up, a strawberry greek muller and a flump and rocky road hifi chopped into little bits. I used the yogurt as a dip and it was very satisfying.

Its time for me to head to bed now, not the most exciting blog but I really havnt done anything today
Posted by Unknown at 15:25