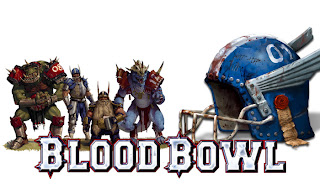 The basic principles are based on fantasy football and is a turn based game where your team tries to beat the opponent in a cross between american football, rugby and chess. Rich's team are the undead so zombies mummy's etc and there is a lot of blood and gore in the game. Now leads me on nicely to tomorrow and the North London derby...I'm not suggesting this game will be as violent as Blood Bowl but it's going to be a tense game and if you follow me on facebook I will be swearing! I also won't be crying if Gareth Bale gets sent off or spends the game looking like an idiot ;)

I had some chores to do this morning so wanted a decent breakfast before I ventured outside. I had originally planned magic waffles but in the end didn't fancy them so after a quick rethink I went for crepes with yummy veg 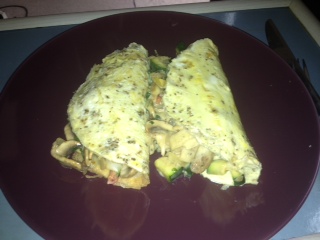 These are so simple to make I mixed two eggs with some garlic and herbs and left to the side. I then cooked mushrooms, peppers, courgettes, onions and spinach. Once the veg was cooked I mixed in half a tub of low low with pepper  and kept warm whilst I made the crepes. I added half of the egg mix to a pan and cooked the crepe things and then repeat. I then shoved the veg into them and nommed them down very quickly.

Once this was done I headed out, despite all our shopping yesterday we managed to forget lunch stuff for Rich and I wanted to get my dorset fruit cereal so it was off to the shops. I tried out the new B&M which was dangerous as there were so many goodies...and the most terrifying thing I have seen yet a Justin Bieber electric toothbrush!

Once I got back lazy mode kicked in and in between some small bursts of energy I spent the day on the sofa reading my book or watching Friends. In an attempt to continue some good food I had a healthy but gorgeous lunch. I decided to stuff two large mushrooms with quorn roast and then cover in cheese. They were gorgeous and quorn roast and cheese works really well! 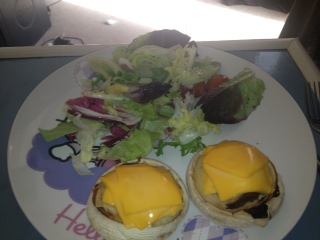 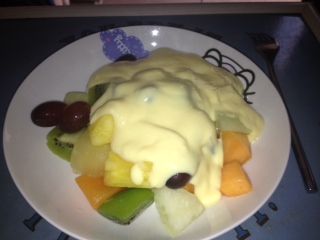 The munchies did strike this afternoon unfortunately and a few bags of crisps were consumed but they are the low syn ones so it's not so bad. We ended up having dinner relatively late and it was a bit of an experiment. I wanted to try the hunters BBQ sauce as a pasta bake sauce and the result was good 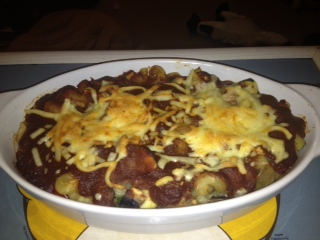 The sauce is really simple 8floz of passata with 4tbsp of balsamic 2 tbsp of worcestershire sauce (or veggie alternative) and sweetener. You cook it until it thickens. I then poured it over some pasta and veggies and baked until the cheese went yummy.

Earlier in the day I decided to try out the rice pudding that Mitchy made last weekend (recipe can be found here http://www.theslimmingworldfiles.com/2013/02/night-mode-activiate.html) and had some of that for pudding. As per mitchy's warning it was pretty lava like at first but it did cool down 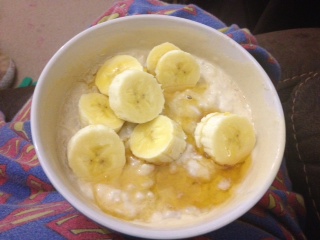 I added a few extras to mine including a toffee weight watchers yogurt and some golden syrup and it was gorgeous. I have actually not had rice pudding before but it's going to be a firm favourite now for sure!

I am off out tomorrow morning to meet a friend and their dog Noodles with Doug and get some good exercise in before coming home to spend 90 minutes swearing at the tv. I may be in a bad mood tomorrow night boy do I hate the football sometimes

Night night all xx
Posted by Unknown at 14:18