Honestly it really can be....today I have been mostly learning stuff. We have had some training sessions at work today and I am a bit of a nerd when it comes to learning stuff so I mostly enjoyed them...mostly there is only so much fun when it comes to data protection. The day actually went nice and quick....I also learnt how to smile sweetly when dealing with moronisisms (yes that is a word) and not actually swear or say anything back. I do love the whole concept of the mental arrows though...the shield goes up and those who used to bug me won't anymore....its magic. Plus as Rich says normally the people just need some common decency he always knows the right words :D

Breakfast was the same as yesterday and im even using the same picture....I think my talking coffee distracted me this morning and I forgot to take a picture ;) 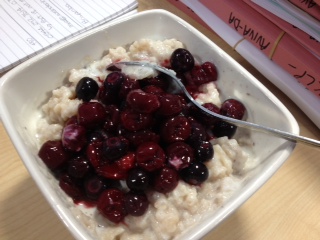 It was complete nommyness and filled me up until lunchtime which was good as the morning was spent learning. I had an early lunch today which never sits well with me as I like my routine but as we had more training at 1 needs musted (another made up word) 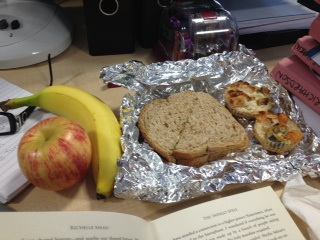 Inside the sandwich was quorn ham with cucumber and a low low triangle used as butter. I also had some of the mini quiches I made on the weekend and enjoyed my fruit too. 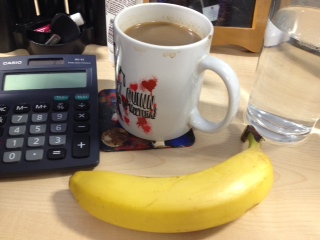 On the way home it was raining so I had to deal with the dilemma of hat v umbrella luckily Rich is fully accepting of me wearing my cat hat and sporting my skull umbrella as it was the weather for both. We wombled back to the car discussing a deleted scene from Friends and games and me having a little moan. Dinner had to be something fitting of the icky spring/summer weather and originally I had planned sausage and chips but it evolved into this 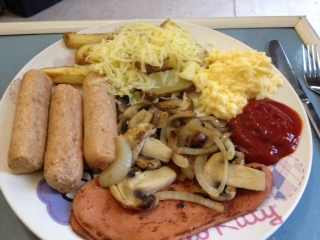 It was amazing! The sausages are the quorn low fat ones that are syn free with some quorn bacon, expertly made scrambled egg courtesy of Rich cheesy chips and onions and mushrooms. It was actually amazing and really hit the spot. You can't beat a 'fry up style' dinner sometimes.

I am getting the blog up early tonight as Arsenal are on the TV and depending on the result I may be either very happy or very moody after the game. Podolski has just scored though so happyness right now. I have some noms to enjoy during the game 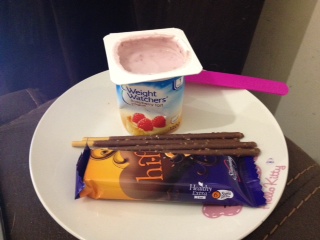 Night night all xoxo
Posted by Unknown at 11:57