A gain and determination

Okay so there was no blog last night mainly because I was tired when I got back from group and a bit down in the dumps. I put on 1/2 a pound last night and been considering why it happened. I wondered if I guesstimated syns too much and went over but I think water retention from my op had a big part to play in it. Nevermind it was only 1/2 and that will come off next week no fear.

So this morning I woke up and decided to set myself a new challenge. A friend of mine did a week where she had 15 SF a day and I decided to give it a go and see what the scales say next week. I am now 4lbs away from 3 stone and I want that sticker in the next two weeks so I will work hard on this challenge.

I started the morning with a walk with Doug using my 'good' hand boy was it cold but it was a nice walk and I will be doing that each day as Rich has agreed to harness him up. I just have to remember not to use my left hand.

We got back from the walk and I decided I fancied an omelette which is a challenge when your hand is a bit buggered but I managed to crack the eggs and grate the cheese and the omelette was so good. I added onions, mushrooms and pepper (3 of my sf) and settled down with that, coffee and last nights Match of the Day (though unsure why I bothered damn you Arsenal do not drop a lead). 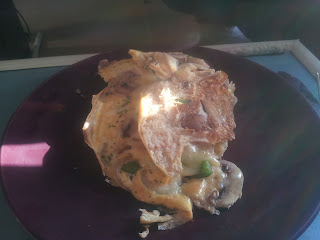 I then settled down to watch some films starting with The Woman in Black which I would give 7/10. Loved the book and play when I was at school so keen to see this. It was a good film though changing the ending annoyed me 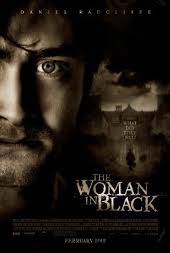 I wasn't sure about Daniel Radcliffe as Kipps but he didn't do too badly although seemed a bit young to me. I need to pick the book up again I think.

The next film was The Cabin in the woods, good for me as it had the adorable Chris Hemsworth in it (google him its worth it) and it was a good film but I did sit there going what the hell most of the time. 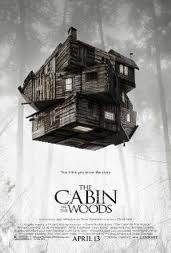 Worth watching if you like the horror genre! It was then time for lunch 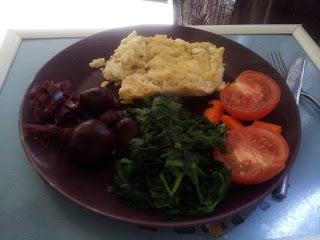 This is a cheese pie which was really good and simple to make, the recipe is as follows

1 pkt cheese and broccoli pasta
1 pkt cheese and onion smash (I used plain as had no cheese and onion)
3/4 pint boiling water
tub quark (I used blitzed up cottage cheese)
3 eggs
1 onion
salt/pepper
garlic granules or flakes
mixed herbs
Put pasta and sauce and smash in large bowl
cover with the boiling water let stand for a few minutes
beat eggs and quark together
add onion and seasoning to pasta mix
add quark and eggs... mix really well
spray quiche or pie dish with fry light
bake at 180 degrees for about 40/45 mins
test with skewer if you think its not set leave in oven for 10 mins but switch off heat

I had it with spinach, beetroot, red cabbage carrot and tomatoes so that was another 5 sf down. 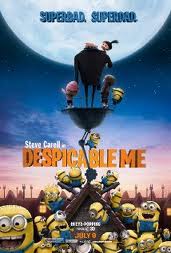 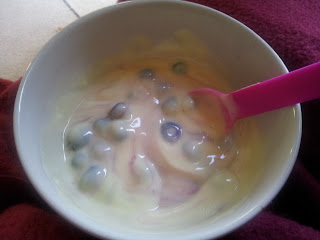 Not surprisingly around 4pm I got the munchies again and decided to use my HEB and have two hifi bars with my coffee. 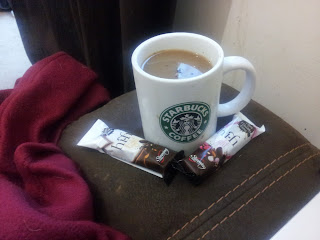 I also settled down to watch my new obsession Downton Abbey seriously why did I never watch this before!

Dinner was more SF food and quorn roast which I love 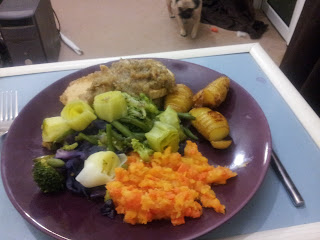 The mush on top of the quorn roast was supposed to be gravy but didn't go as runny as normal. I make the gravy with mushrooms, onions and garlic fried off then blitzed. I then add a veg oxo with water and its very tasty.

I still have my syns and a healthy extra so I think I am going to have a hot choc and some garlic crackers and cheese if I ever move from Bondi vet (Dr Chris is so yummy and the animals on it are adorable). Doug isn't keen on this show and has spent most if it growling.

Tomorrow is payday so I will be spending money primarily on Rich as want to do his christmas presents and I want to get a few bits for Doug he is one spoilt pooch.