Yesterday was a fun day Arsenal won 5-2 (must have been an omen putting the picture up on the blog) and then we saw Breaking Dawn Part 2 which I really enjoyed. It was my favorite out of the 5 and had me quite emotional and shocked in places. We went to the directors lounge at our local cinema, they serve food and drinks in our chair so its a nice treat and this is what I had 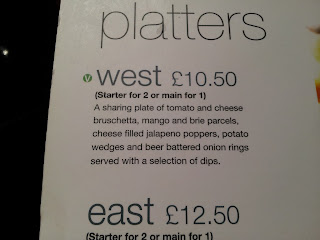 Syn wise it was not ideal but I had planned for this and I have been minimizing syns to prepare for this as its not a daily event. What I am most proud about is that I had an internal battle during the evening not to go and eat naughty food and I won it so pat on the back for me :D

So onto today, I had seen someone on one of the groups had done magic pancakes in the oven. I have tried this before as muffins but not as a biscuit type thing. I have to say it was gorgeous. 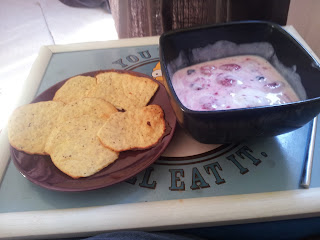 In the bowl is a muller light with fruit and I had about half of the biscuits I made leaving the rest to snack on during the day. Then on with the morning tasks of watching X Factor ( seriously Rylan or Christopher have to go this week) and putting things on ebay. Before I knew it lunch was calling and I fancied cheesy pasta. I used the cheese and broccoli pasta n sauce which are nice and simple to make. 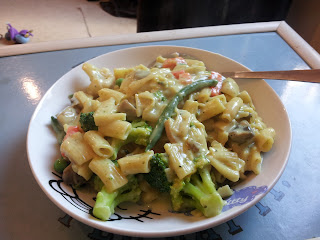 I added some mushrooms and mixed veg along with some low low (half a tub is a healthy extra) and that kept me going for a while. The afternoon was similar to the morning except I added some watching sky + shows in as our space left is getting critically low. I then decided I had to do some more productive and consider how nice the magic pancake biscuits were I decided to make them in muffin form for breakfast tomorrow.

The magic pancake recipe is very simple and was created by a good friend of mine Tracey Solley Brison Stone who has been a inspiration. She has lost tons of weight and her story was recently published. The recipe is 35g of porridge oats, one muller light (or syn free yoghurt of your choice) 2/3 eggs and sweetener. You soak the oats overnight (though it isn't always needed) then add the eggs and sweetener and cook. I also decided to make a slimming world friendly cake 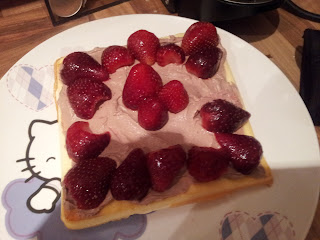 The whole thing is 2 1/2 syns. The inside has lemon curd which is so nice and the recipe is as follows


Method:
1. Mix the sweetener and lemon rind lemon juice and eggs together in a small-ish glass bowl (small enough to fit into a pan of boiling water later)


2. Put glass bowl over water in a pan and heat gently for about 10 minutes


3. Whisk frequently until the mixture starts to thicken


5. Once the mixture is fairly thick, add your quark and mix in well.

The topping is quark and options chocolate with sweetener and it should be nice and tasty.

Before I knew it I was hungry again so it was time to start prepping dinner...now warning the picture is not fab for this but it tasted so much better than it looks. 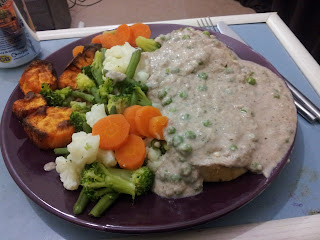 Under the sauce is a few slice of quorn roast which I really like. The sauce is mushrooms and onions blended down with garlic and herb philli added then some veg stock. Next time I may chop the mushrooms smaller and not blitz them. I chucked the peas in too as I didn't fancy playing chase the peas tonight. Lots of veggies are on the plate too which is the norm for me unless I'm being lazy or a SW devil.

So that's it for me today work beckons tomorrow then I am sure I will cook something delightful for dinner. I only have a four day week this week as on Friday I am having surgery on my left hand and will be off work for a bit recuperating and that leads nicely into another reason to lose weight. I have been waiting months for this surgery (and still have to wait for the right hand to be done) and I had a date months back for the consultation but the clinic turned me down due to my BMI. Okay this does tie into health but health is important and needs to be reiterated hehe.  Mine is currently 46.90 which is way too high! It will be down.
Posted by Unknown at 11:39